Generation 4 brought with it new evolutions for Pokemon from Generation 1 and 2, upgrades to previous forms that were either basics or only had a first stage evolution. Rhydon got an evolution which turned it from a bipedal rhino into a bipedal rock monster that looks like a rhino.

Part of the upgrade came in greatly enhanced stats for the cost of 100 candies and 1 Sinnoh Stone. Rhyperior isn’t the best of the best but it’s definitely in the top 3.  As a Ground attacker running Mud Slap and Earthquake, it lies third  compared to the juggernauts of Groudon and Garchomp.

Groudon isn’t currently available as a raid boss and at time of writing, Garchomp hasn’t been released yet. Even if it were, it would be a rare Pokemon except for its Community Day which is a long way away. So that leaves Rhyperior and Sinnoh Stones aren’t that easy to come by. Rhyhorn seems to be an uncommon find but I believe it can show up as a nest Pokemon so its far easier to find than Gible will be.

That’s when an idea came to me. Rhydon wasn’t exactly terrible on its own. Its definitely outclassed by Groudon in the Ground meta and has no Rock fast move to compete with Tyranitar or Golem. However it does have access to Mud Slap and Earthquake, the same as Rhyperior. Its stats are at the very least above average. Could it be a cheap Ground attacker? I think it can. First, lets look at the stats for Rhydon and a few of its rival Rock and Ground types.

Of the 6, Rhydon’s attack is second to last. Its defence is also in the same position but its stamina is 3rd best out of 6. Nothing to shout about, even if the other 5 Pokemon are supposed to be top tier Ground attackers. Now I wanted to do a comparison of its Damage per Second (DPS), Total Damage Outpot (TDO) and its overall score in attack. For this I turned to Gamepress’ Spreadsheet tool which  gives you a breakdown of them. This is what I got. 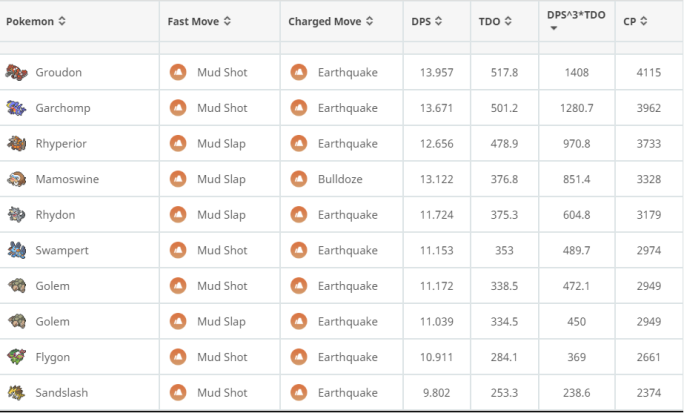 Comparing all Pokemon with a pure Ground moveset, Rhydon finishes 5th place. As expected, it loses out to Groudon,Garchomp and Rhyperior. Losing out to Mamoswine wasn’t unexpected, and I think if Mamoswine had higher stats it could actually outclass the top 3.

There is however, one major difference between Rhydon and the rest. Its the only Pokemon in the top 10 above which isn’t a fully evolved Pokemon. Everyone else is in their final form. Rhydon isn’t. Its just one Mamoswine away from its final evolution. It beats out Swampert and Golem and that’s pretty impressive.

It does so because Rhydon wasn’t conceived with an evolution in mind. Until Generation 4 it was made to be the final stage Pokemon of its line. It was also given stats that allowed it to stand out, unlike more mediocre folk such as Lickitung. When they added Rhyperior, it was essentially Rhydon on steroids. However, Rhydon was never bad to begin with. It may not be the best but that doesn’t make you bad.

Finally, Rhydon is the cheapest Pokemon to evolve on that list. Lets not discuss Groudon, it doesn’t have an evolution. Rhyperior costs 125 candies and a Sinnoh Stone. Garchomp costs 125 Gible candies. Everyone else except Sandslash costs 125 candies to evolve. Sandslash costs 50 candies. Now to get Rhydon, it only costs 25 candies. Let that sink in. 25 candies. Just use Pinap berries to catch 4 Rhyhorn and you’re already there. That’s practically an Eeveelution; if Eevee were a big rhinoceroses and evolved by learning to stand up. Rhydon was made to be a 50 candy evolution because it was a one stage line. When it became a two stage one evolving Rhyhorn into Rhydon got reduced to fit the 125 candy cost.

Its a good Ground type overshadowed by top class rivals but its also the cheapest guy on the list. If you can’t get Rhyperior yet, why not turn to Rhydon? Its a stepping stone to it and your candies invested in it won’t go wasted. It’ll just lead to an even stronger Rhyperior. Groudon is also hard to come by, as I’ve mentioned. Until we get a rerun of it or Groudon day, if its gone its gone. Plus legendary candies are always in short supply unless you’re the type who has thousands of rare candies to build a team of 6 Groudon. That would mean you are the type of guy or girl who doesn’t hesitate to spend cash on in-game Coins to buy premium raid passes but not everyone can or will do that.

If you do not have a team of 6 Ground types for Heatran, and you should because Heatran takes 2.56 times more damage from Ground moves. This’ll also come in handy for future raid bosses such as Zekrom and Reshiram, two powerhouses that will arrive in Generation 5. If you still can’t get a good team of 6, turn to Rhydon as a stop gap measure.

Its an investment you won’t regret. You can always evolve it later on when it becomes obsolete, thus preserving its viability. Think about it.