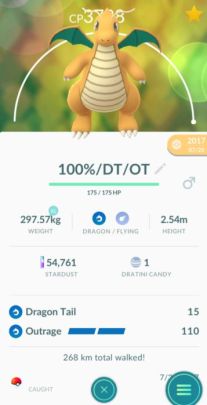 Dragonite is an all rounder, boasting great stats in attack, defence and stamina. It was also the only dragon type in Generation 1 so it made dragons a rare find as Dratini could only be hatched from 10km eggs.

I was happy to get a 93% dratini which I immediately evolved into a Dragonite, a tough task before Buddy Pokemon and Pinap berries existed. I even evovled a second dratini but it was only 87%.

Now, the odds of getting a 100% Pokemon in the wild are incredibly low. A reddit post gave a 1 in 4096 chance of one spawning. This doesn’t include the spawn rates of each Pokemon. That would make a 100% dratini even rarer. So I didn’t expect it as I walking home one night, especially when it was only 141CP. I was going to transfer it away but decided to get its IV appraisal in case it was anything good. Luckily I did, it turned out to be 100%!

I was so thrilled yet a little disappointed because at 141 CP, it would need a lot of candies to be viable. Remember, this was before Community Day and Buddies so I had to scrounge for rare candies mostly. I walked a lot with this dratini as my buddy when it was possible because every candy mattered.

Community Day really helped me with the candies, I evolved it and then spent the bulk of my candies powering it up since its CP upon evolution was only 650! Weak and I had to use TMs to get the best moveset you see up there. In the end I managed to get it up to at least 2500 CP , slowly increasing it over time until it reached the current CP of 3738.

Unlike Pinsir, Dragonite far more useful for me. I’ve used it against Latios and Latias in raids, perhaps against future Dragon type raid bosses I’ll use it if I don’t have anything like Rayquaza or Garchomp. It’ll definitely be a part of my raid teams for all generations and very likely my first maxed out Pokemon.

I have no regrets spending stardust and candy on it to power it up, its never disappointed me.

One thought on “The Powerhouse: Dragonite”